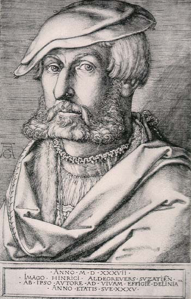 German, (1502–ca. 1561)
Heinrich Aldegrever (1502 - ca, 1555) was a German painter and engraver. Because of the tiny size of his prints, Heinrich Aldegrever is considered one of a group of German Renaissance artists known as the "Little Masters"âthe group of German artists making small old master prints in the generation following Albrecht DÃ¼rer.

Born in Paderborn, Germany, Aldegrever first trained as a goldsmith and produced a large number of ornamental designs for ironwork during the early part of his career, including designs for sheaths of swords, daggers and domestic knives. His first engravings appeared in Germany in 1527, and were signed with the monogram âAGâ, closely resembling that of Albrecht DÃ¼rer. Influenced by the Protestant Reformation that was steadily gaining popularity in Germany at the time, Aldegrever became a Lutheran. Because of the lack of church commissions, Aldegrever devoted most of his time to portrait painting and printmaking. As an active supporter of the Reformation, Aldegrever executed portraits of Martin Luther himself and Philip Melanchthon. Aldegrever produced roughly 290 engravings and woodcuts, primarily from his own designs, which are defined by their delicate and minute style, entitling him to a place in the front of the rank of the so-called âLittle Mastersâ. From the close resemblance of his style to that of Albrecht DÃ¼rer he has also sometimes been called the "Albert of Westphalia".

Your current search criteria is: Artist is "Heinrich Aldegrever".