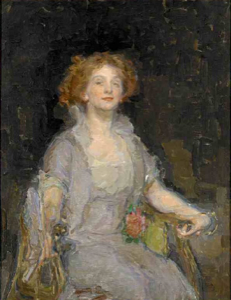 American, (1874–1959)
Gertrude Partington Albright (September 11, 1874 - September 7, 1959) was a British-born American artist known for her portraiture, etchings, and Cubism-inspired California landscape oil paintings. Albright was often commissioned to make portraits, and her portrait etchings were admired for their skillful likenesses and clear, minimal lines.

Born in the coastal village of Heysham, England, Albright emigrated to the United States with her family at the age of fifteen and settled in Oakland, California. Albrightâs creativity was fostered from a young age by her father, from whom she received artistic training. Albright worked as an illustrator for the San Francisco Examiner, creating courtroom sketches and society portraits for the publication. With the money she earned, Albright travelled to Europe to receive further artistic education and enrolled at the AcadÃ©mie DelÃ©cluse in the late 1890s. By 1903, Albright was exhibiting at the Paris Salon. Upon her return to California, Albright opened a painting and printmaking studio in San Francisco in 1912. Five years later she joined the faculty at the California School of Fine Arts where she became a professor of painting and etching. Albright was an established artist and exhibited internationally. Her work is in the permanent collections of the Metropolitan Museum of Art, the Oakland Museum, and the De Young Museum.

Your current search criteria is: Artist is "Gertrude Partington Albright".