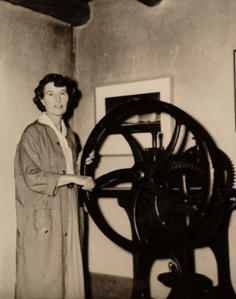 American, (1903–1996)
Gene Kloss (July 27, 1903 - June 24, 1996) was an American visual artist known primarily for her etched prints of Western American landscapes and her depictions of ceremonies of the indigenous Pueblo people drawn entirely from memory.

Born in Oakland, California, Kloss studied painting and printmaking under renowned etcher Perham Nahl at the University of California, Berkeley, from which she graduated in 1924 with an honors in art. Kloss spent two additional years at the California School of Fine Arts in San Francisco (known today as the San Francisco Art Institute) and the California College of Arts and Crafts in Oakland. In 1925 she married Phillips Kloss, a poet, and they made a honeymoon journey to New Mexico. It was a decisive point in Klossâs career, initiating a lifelong fascination with the landscape of the Southwest and the Native American peoples who inhabited the region. The couple lived in Berkeley, California during the colder months and returned to Taos, New Mexico every summer before making the decision to settle there permanently. During their time in Taos, Gene produced etchings and paintings of the Pueblo communities and the spectacular landscapes of the Southwest. Kloss received widespread recognition in the 1930s for her work with the Public Works Administration during the Great Depression. Kloss produced a series of nine New Mexico scenes from that period which were reproduced and distributed to public schools across the state. Additionally, in 1935 Kloss was one of three Taos artists to represent New Mexico at an exhibition in Paris entitled Three Centuries of Art in the United States.

Your current search criteria is: Artist is "Gene Kloss".