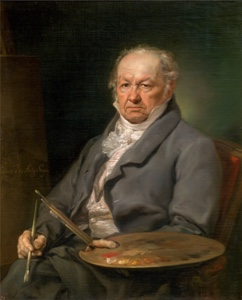 After a severe illness left him without hearing, his artwork began to take on a much darker aura. This pessimistic, and at times gruesome, outlook present in his works became more transparent in his printmaking series Disasters of War as well as a number of his paintings from the early 19th century, such as The Third of May 1808. Having remained in Spain for the duration of Napoleonâs Spanish invasion, it is assumed that Goya was haunted by the disturbing viscerality of war. The Peninsular War may have influenced his Black Paintings of 1819-23, which were painted directly onto the walls of his home.

In 1824 Goya left his Spanish home to retire in France, spending his final years between Bordeaux and Paris. Goyaâs artworks have inspired many of his contemporaries, including Pablo Picasso when creating his now iconic masterpiece Guernica, 1937.

La Nain Sebastian (The Dwarf Sepbastian Morra--dwarf in the Court of Philip IV), after Velasquez 1963.9

Your current search criteria is: Artist is "Francisco de Goya".