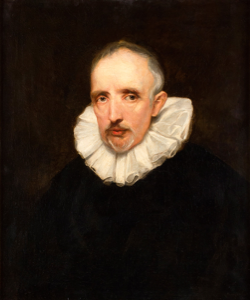 Italian, (ca. 1535–1612)
Frederico Barocci (ca. 1535 - 1612) was an Italian Renaissance painter and printmaker considered to be the lead painter of the central Italian school in the latter half of the sixteenth-century. Of his best known works, Madonna del Gatto (Madonna of the Cat) (1575) showcases his distinctive use of a pale, pastel color palette of vermillion pinks, mother-of-pearl whites, and greys. Additionally, Barocci employed a sfumato effect in his paintings, making defining lines of forms appear to dissolve into delicately colored, smoky mists.

Born in the Duchy of Urbino, Papal States, Barocci made two visits to Rome to study the works of Michelangelo. Upon his second visit, Barocci, alongside fellow painter Federico Zuccaro, was commissioned to create frescoes for Pope Pius IVâs Casino in the Vatican Gardens. Barocci otherwise lived and worked for the remainder of his life in Urbino where he became the lead altarpiece painter for local churches and patrons, such as the Duke of Urbino.

Your current search criteria is: Artist is "Barocci Federico".