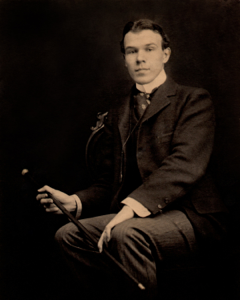 American, (1876–1925)
Ernest Haskell (June 30, 1876 - November 1, 1925) was an American painter, printmaker, and illustrator who gained international fame for his etchings. In addition to his printmaking legacy, Haskell is considered a pioneer in the field of theatrical posters and his involvement in the creation of camouflage painting, which he was commissioned to help develop by the United States Army during World War I.

Born in Woodstock, Connecticut, Haskell spent his childhood on the family farm. While recovering from a bout of typhoid fever as a teenager, Haskell passed the time sketching and drawing. Though he was expected to attend Yale University on a football scholarship, Haskell was offered a job working as an illustrator for a magazine. He soon began working in New York City as a professional illustrator in the art department of the New York American. Over the next decade of his life, Haskell made three lengthy trips to Paris to conduct independent art studies. Returning to New York in the late 1890s, Haskell equipped himself with techniques he had learned from Parisian advertising and theatrical posters. This led him into a career as a poster artist, for which his work became very popular. In the decade before his death, Haskell began creating etchings which were met with critical acclaim when exhibited. It was through his etchings that Haskell became known as a fine artist, portraitist, and poster lithographer, even gaining the title of âthe American etcher.â

Pamphlet of reproductions entitled Etchings by Ernest Haskell published by The Century Magazine 2005.137.a

Pamphlet of reproductions entitled Etchings by Ernest Haskell published by The Century Magazine 2005.137.b

Your current search criteria is: Artist is "Ernest Haskell".