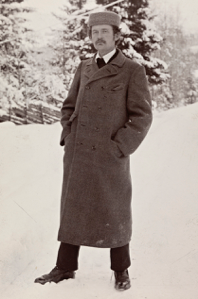 Norwegian, (1863–1944)
Edvard Munch (December 12, 1863 - January 23, 1944) was a Norwegian painter. His Expressionist works portrayed representations of Munchâs own emotional discord, creating mysterious and symbolic scenes with an otherworldly quality. Munch is best known for his painting The Scream (1893), which has become one of the most iconic images in the history of art, widely recognized as a visual representation of anxiety and alienation.

Born in LÃ¸ten, Norway, Munchâs childhood was blighted by the death of his mother and sister by tuberculosis and his fatherâs struggle with mental illness. Munch studied at the Royal School of Art and Design in Oslo before travelling to Paris in 1889 where he became influenced by the works of Vincent van Gogh, Paul Gauguin, and Georges Seurat. Plagued by his own troubles with mental illness, Munch suffered a breakdown in 1908 that left him hospitalized. He spent the remainder of his life in quiet solitude, choosing to remain in Norway until his death in 1944 at the age of 80.

Self Portrait with Cigarette 1941.2

Your current search criteria is: Artist is "Edvard Munch".