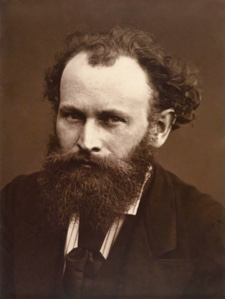 French, (1832–1883)
Ãdouard Manet (January 23, 1832 - April 30, 1883) was a French Impressionist painter. As one of the first painters to depict modern life scenes of nineteenth-century Paris, Manet was a pivotal figure in the progression from Realism to Impressionism. His controversial and greatly influential 1863 masterpiece Olympia is considered to be the work that marked the beginning of modern art.

Born in Paris, France to a bourgeois family, Manet rejected his fatherâs wishes for him to become a naval officer and instead trained as a painter in the studio of artist Thomas Couture. In 1863, his painting Le DÃ©jeuner sur lâHerbe (The Luncheon on the Grass) (1863) was rejected from the Paris Salon and instead exhibited at the Salon des Refusesâtranslating to the Exhibition of Rejectsâwhere it gained much attention for its scandalous depiction of a casual picnic scene with two fully dressed men, a nude female figure in the foreground and a scantily dressed female bather in the background. Though his early works received much negative criticism, Manet became regarded as one of the figureheads of Impressionism, and by the late 1870s his works were praised highly by both the Salon and his peers.

Your current search criteria is: Artist is "Ãdouard Manet".