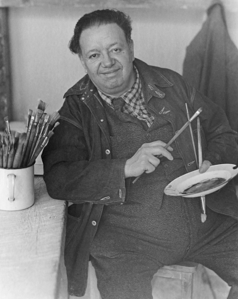 Inspired by Renaissance frescoes, Riveraâs brand of muralism combined his conviction in the value of public art with what would become his signature earth-toned, Social Realist style. In accordance with his Marxist views, Rivera positioned the masses as the heroes of his murals, painting narrative scenes championing indigenous Mexican culture and laborers who worked in the name of progress. Of his most notable works is Detroit Industry (1932-33), a 27-panel tribute to the workers and machinery of the Ford Motor Company, which reveals Riveraâs interest in the form and function of industrial technology.

Rivera had numerous marriages, most famously including his turbulent marriage to fellow Mexican artist Frida Kahlo. As of 2018, Rivera holds the record for highest price at auction for a work by a Latin American artist.

Your current search criteria is: Artist is "Diego Rivera".