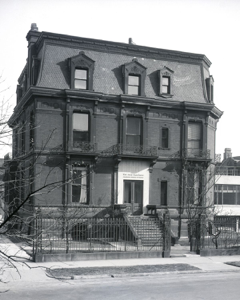 American, d. 20th Century
The New Bauhaus School of Design, now known as the IIT Institute of Design at the Illinois Institute of Technology, is the American descendant of the German Bauhaus. Founded in 1973 by Bauhaus master LÃ¡szlÃ³ Moholy-Nagy, the Bauhaus had a revolutionary agenda to create a new aesthetic appropriate for a modern industrial society, making the university a global center of modernism in the mid-twentieth century.

Financial problems forced the school to temporarily close its doors in 1938 until Walter Paepcke, an early champion of industrial design in America, offered his personal support which allowed Moholy-Nagy to reopen the school a year later as the Chicago School of Design. In 1949 it became part of the new Illinois Institute of Technology university system and the first educational institution in the United States to offer a PhD in design. The Institute of Design still maintains the original approach of the New Bauhaus which included integrating disciplines, looking at design holistically, and seeking to use technology to improve our quality of life.

Your current search criteria is: Artist is "New Bauhaus School of Design".