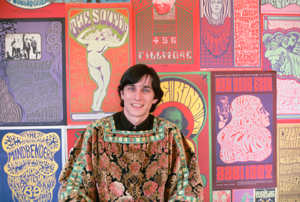 American, (1937–2020)
Wes Wilson (July 15, 1937 - January 24, 2020) was an American artist known as the father of psychedelic rock concert posters of the 1960s. In particular, Wilson is best known for inventing a style synonymous with the peace movement, the psychedelic era, and the cultural revolution of the 1960s. Heavily influenced by the style of Art Nouveau, Wilson is known as having invented and popularized the psychedelic font that made letters appear as if they were shifting and melting.

Born in Sacramento, California, Wilson moved to San Francisco after graduating high school to attend San Francisco State College where he studied philosophy and religion. Putting himself through school, Wilson later dropped out to help support his young family. Due in large part to the Haight-Ashbury cultural revolution, by the mid-1960s concert posters were in high demand in San Francisco. Wilson, recognizing the growing demand, began taking commissions. His first published poster âAre We Next?ââdesigned in protest against the Vietnam Warâcaught the attention of famed music promoter Chet Helms. By 1966 Wilson had started making posters for both Helms and Bill Graham. The posters became so popular in San Francisco that people were tearing them down as soon as they went up. As a result, Wilsons posters were soon being reprinted for sale, and poster shops sprang up locally and nationwide. Wilson went on to create iconic posters for Jefferson Airplane, Otis Redding, and the Grateful Dead.

Your current search criteria is: Artist is "Wes Wilson".