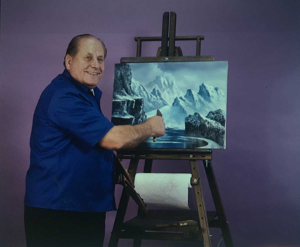 Canadian, (1915–1997)
Bill Alexander (April 2, 1915 - January 24, 1997) was a German painter, art instructor, and television host. Alexander was the creator and host of the television series The Magic of Oil Painting (1974-82) that ran on PBS in the United States. He is credited with having taught fellow television painter Bob Ross his signature wet-on-wet technique.

Born in East Prussia, Alexanderâs family fled to Berlin during the first World War. Apprenticed as a carriage maker, Alexander was drafted into the Wehrmacht during World War II. Captured by Allied troops, he painted portraits of Allied officersâ wives, and made his way to the United States soon after. After World War II, Alexander migrated to North America as a refugee, where he pioneered his quick, modern version of the 15th century wet-on-wet painting technique. In 1974, Alexander became the host of his own television show The Magic of Oil Painting on PBS, in which Alexander focused on painting education and demonstrated his own methods. TV host and prolific painter Bob Ross studied under Alexander, from whom he learned this wet-on-wet technique â a method of painting rapidly using progressively thinner layers of oil paint. However, as Rossâ popularity grew, his relationship with Alexander became increasingly strained. In a 1991 interview with The New York Times, Alexander claimed to have invented the technique, accusing Ross of copying it, and betraying him by doing so. Alexander refers here to the fact that Bob Ross used some of his individual patter like "happy little trees" and borrowed some of his unique peculiarities.

Art historians have pointed out that the "wet-on-wet" (or alla prima) technique actually originated in Flanders during the 15th century, and was used by Frans Hals, Diego VelÃ¡zquez, Caravaggio, Paul CÃ©zanne, John Singer Sargent, and Claude Monet, among many others. However, Alexander invented the step of priming the canvas with a liquid white paint (before starting to paint) and designed the style of palette knife employed, which is larger, firmer, and has one straight edge. Both inventions are fundamental for his wet-on-wet technique.

Your current search criteria is: Artist is "William Alexander".