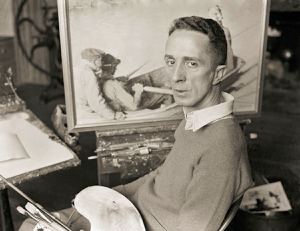 American, (1894–1978)
Norman Percevel Rockwell (February 3, 1894 - November 8, 1978) was an American painter and commercial illustrator whose works reflected the everyday life of American culture including portrayals of nuclear families, mischievous children, and small-town life. Rockwell is most famous for his cover illustrations made for The Saturday Evening Post magazine, for whom he worked for nearly five decades. In his later years Rockwell broke from his typical subject matter of sentimental portrayals of the American life and began to address more serious, politically-driven topics. Of his best-known works is The Problem We All Live With (1964) which depicts Ruby Bridges, a six-year-old African-American girl, being escorted by U.S. marshals on her first day at a formerly all-white public school during the New Orleans school desegregation crisis.

Born in New York, NY, Rockwell found success at a young age. As a teenager Rockwell was hired as art director of the Boy Scouts of Americaâs official publication, Boysâ Life, which he continued to produce cover art, calendars, and other illustrations for over the span of six decades. Rockwell went on to study art at the National Academy of Design and The Art Students League. In 1977 Rockwell received the Presidential Medal of Freedomâthe nationâs highest civilian honor. He died on November 8, 1978 at his home in Stockbridge, MA.

Your current search criteria is: Artist is "Norman Rockwell".