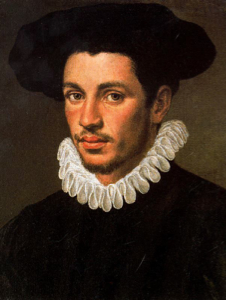 Italian, (1560–1609)
Annibale Carracci (November 3, 1560 - July 15, 1609) was an Italian Baroque painter and, along with his brother Agostino and cousin Lodovico, one of the founders of the Accademia degli Incamminati (Academy of the Progressives). Carracci is best known for his frescoes on the gallery ceiling of the Farnese Palace in Rome.

Carracciâs style is defined by his aspiration to return to a classical monumentality, focus on naturalism, depicting reflections of light, and his creation of the âideal landscape,â in which figures, man-made structures, and nature are in perfect harmony, with the implication that nature is both tamed and ennobled by the presence of man. Carracci is additionally credited with encouraging the shift away from late 16th-century mannerist painting, instead promoting a more naturalistic style. Uninterested in making a name for himself as a court painter, Carracci chose instead to focus on the craft of art and the practice of observing and working from lifeâa sentiment that he upheld at the Accademia degli Incamminati.

Carracciâs impressive fresco for the ceiling of the Farnese Palace, created between 1597 and 1601, is painted to give the illusion of opening into the sky and is studded with mythological love scenes as individually framed trompe lâoeil easel paintings. Despite his extensive work on the fresco, Carracci was only paid a scant five hundred lire, for which he famously suffered a breakdown. The Farnese Palace ceiling remains his most important legacy.

Your current search criteria is: Artist is "Annibale Carracci".