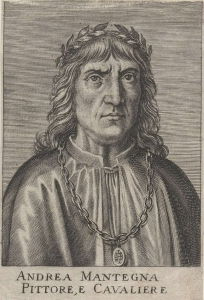 Italian, (ca. 1431–1506)
Andrea Mantegna (ca. 1431 - September 13, 1506) was an Italian painter, student of Roman archaeology, and leading producer of prints in Venice before 1500. Mantegna is known for his visual experimentation with perspective and spatial illusion, which is perhaps most apparent in his painting The Lamentation over the Dead Christ (1490), which positions the viewer as a mourner standing at the foot of the marble slab upon which the dramatically foreshortened body of Christ is laid.

Born in Padua, Italy, Mantegna studied under Paduan painter Francesco Squarcione from the young age of eleven. Though he was a favorite student of Squarcione, Mantegna believed his talents were being exploited and became disgruntled that his teacher had been profiting from the work Mantegna had done. It was then, at the age of seventeen, that Mantegna left his home of Padua, never to return, and married into the rival Venetian family of the Bellinis after training under painter Jacopo Bellini. Mantegna went on to become court painter for Ludovico Gonzaga in Mantua, and later completed frescoes in Rome commissioned by Pope Innocent VIII for the Vatican. In the 1480s, Mantegna was knighted in Mantuaâa rare honor for an artist. It was in Mantua that Mantegna settled for the remainder of his life.

The Chalice, after a drawing by Andrea Mantegna 1953.7

Your current search criteria is: Artist is "Andrea Mantegna".