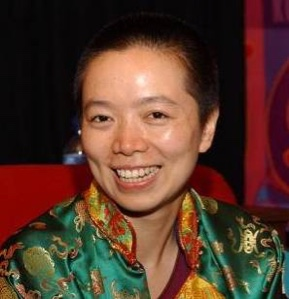 Chinese, b. 1974
Shi Tou is a Chinese visual artist whose work reflects the intersection of feminism, queerness, and gender identity. Tou works across many mediums; her body of work includes paintings, photographs, short films, and documentaries. Her photographic series Together portrays Touâs own friends posed in couples as if they were wedding portraits. Each of the several lesbian couples wear wedding gowns, smiling and laughing in a celebration of same-sex marriage.

Tou is currently one of the most famous lesbian activists in China, and was one of the first to come onto national television in China to discuss same-sex marriage. Her activism has led her to also organize LGBTQ conferences and conventions in mainland China.

Your current search criteria is: Artist is "Shi Tou".