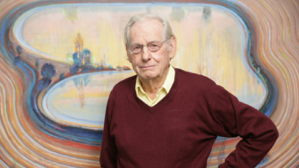 American, b. 1920
Wayne Thiebaud (born November 15, 1920) is an American painter known for his colorful representations of everyday objects, landscapes, and figure paintings. Thiebaudâs exaggerated color palette and interest in objects associated with consumer culture led him to be often associated with the pop art movement, although his early works predate the work of the figureheads of pop art. It is suggested that Thiebaudâs works may have influenced the commencement of the movement.

Born in Mesa, Arizona, Thiebaud relocated with his parents to Southern California where he spent his childhood. After graduating highschool, Thiebaud spent the next decade working as a cartoonist and designer between California and New York, and in that time served as an artist for the United States Army Air Forces in the First Motion Picture Unit. Thiebaud went on to earn both his BA and MA from Sacramento State College. He is best known for his paintings of diner food, such as pies and pastries, and for what is perhaps his most famous painting Three Machines (1963), which is currently housed in the permanent collection of the De Young Museum in San Francisco.

Your current search criteria is: Artist is "Wayne Thiebaud".