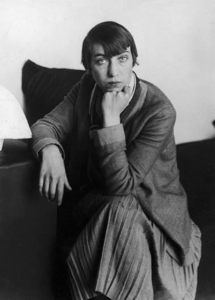 American, (1898–1991)
Berenice Abbott (July 17, 1898 - December 9, 1991) was an American photographer known for her portraits of 20th century cultural figures and photographs of architecture and urban design of 1930s New York City. Her series Changing New York (1936-38) captured both the architecture and shifting social landscape of the city during the Great Depression on assignment from the WPAâs Federal Art Project.

Born in Springfield, Ohio, Abbott briefly attended Ohio State University before deciding to move to the New York City neighborhood of Greenwich Village. Driven by her interest in sculpture, Abbott traveled to Europe to study art at both the AcadÃ©mie de la Grande Chaumiere in Paris and the Prussian Academy of Arts in Berlin. Abbottâs passion for photography became fully realized in 1923 as she began working in Paris as a darkroom assistant for the famed Surrealist Man Ray, who had allegedly sought an assistant with no previous knowledge of photography. Ray, impressed by her darkroom work, allowed her to use his studio to create her own photographs. After returning to New York City, Abbott was hired by the Federal Art Project in 1935 to elaborate on her series of photographs, Changing New York, that she had begun developing upon her relocation to the city in 1929. She was able to hire assistants to help her develop photographs, allowing Abbott to devote all of her time to producing, printing, and exhibiting her photographs. By the time she resigned from the FAP in 1939, Abbott had produced 305 photographs of New York City.

After her success in the 1930s, Abbott traveled throughout the country as a photographer before settling in Maine. Abbott died in Monson, Maine, on December 9, 1991.

Your current search criteria is: Artist is "Berenice Abbott".