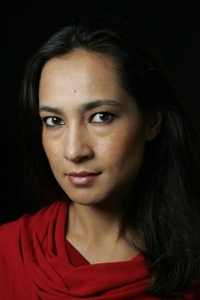 Pakistani, b. 1969
Shahzia Sikander is a Pakistani-American visual artist working and living in New York City. Sikander received her BFA from the National College of Arts in Lenore, Pakistan; in 1993 she moved to the United States where she completed her MFA in 1995 at the Rhode Island School of Design. Though Sikander works with a range of mediums, including drawing, installation, film, performance, and printmaking, she is known for her miniature paintings.

Inspired by the highly ornate traditional Persian and Indian style of painting, Sikanderâs miniature paintings blend both Eastern and Western styles and tradition to create paintings that are simultaneously disciplined and subjective. Raised in a Muslim household, Sikanderâs Muslim and Feminist perspectives are reflected in her artwork. She is interested in combining both Hindu and Muslim imagery, often in the same painting, as a way to meld Indian and Pakistani historic and artistic traditions. Other subjects present in her work include the investigation of issues surrounding migration, borders, and the subversion of dated, Orientalist stereotypes of the Eastern woman.

Your current search criteria is: Artist is "Shahzia Sikander".