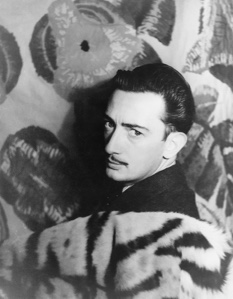 Spanish, (1904–1989)
Salvador DalÃ­ was a Spanish painter, filmmaker, sculptor, and photographer, recognized for his contribution to the Surrealist movement. His works are known for their bizarre imagery and dreamlike quality, such as the melting clocks in his painting The Persistence of Memory, 1931.

DalÃ­ was born in Figueres, Catalonia and received an education in fine arts in Madrid. The 1929 debut in Paris of his film Un Chien Andalou, made in collaboration with Spanish filmmaker Luis BuÃ±uel, helped launch DalÃ­âs artistic career. Inspired by avant garde artistic movements such as Cubism, DalÃ­ was naturally attracted to the Surrealist movement. He was drawn to the Surrealistsâ interest in exploring dreams, sexuality, and the human psyche, and though his time in the group was short lived, his Surrealist works awarded him international acclaim.

Like many Spanish artists, DalÃ­ moved to France in 1936 at the start of the Spanish Civil War before moving to the United States in 1940 where he found much success as a commercial artist. In 1948 he returned to Spain where he continued to create works of art in what is now known as his nuclear mysticism style inspired by his restored Catholic faith. DalÃ­ died in 1948 in his hometown of Figueres, Catalonia.

Your current search criteria is: Artist is "Salvador DalÃ­".