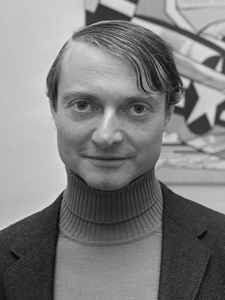 American, (1923–1997)
Roy Lichtenstein (October 27 1923 - September 29, 1997) was an American Pop artist and a leading figurehead of the movement in the 1960s. Lichtenstein is known for his parodies of advertisements and comic books, and his attention to the clichÃ©s of both commercial print culture and high art aesthetic. Of his most renowned works are Whaam! and Drowning Girl (1963); both are demonstrative of Lichtensteinâs manual process of hand-copying the original source image, tracing the sketch onto canvas using perforated templates to exaggerate the technique commonly used in printed imagery known as Ben-Day dots. This dotted patterning would become a signature element of Lichtensteinâs style, and echoed his sentiment that Pop art was what he described as âindustrial painting.â Aiming to exaggerate pictorial clichÃ©s of commercial art, Lichtenstein often restricted his color palette to primary colors and heightened contrast to incorporate the appearance of mechanical reproduction into the world of fine-art.

Fish and Sky from portfolio Ten from Leo Castelli 1969.61

Your current search criteria is: Artist is "Roy Lichtenstein".