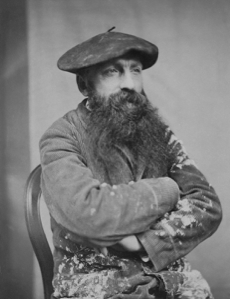 French, (1840–1917)
FranÃ§ois Auguste RenÃ© Rodin (November 12, 1840 - November 17, 1917) was a French sculptor known for such sculptures as The Thinker (1906) and The Kiss (1882), both of which reside at the MusÃ©e Rodin in Paris, France. Rodin is largely known as the father of modern sculpture.
Born in Paris, France, Rodin studied sculpture and decorative arts from an early age. Despite his artistic training, Rodin was rejected three times from the prestigious Ãcole des Beaux-Arts, so he turned instead to working as a day laborer in plaster workshops. Rodin travelled to Florence where he was introduced to the sculptures of Michelangelo, whose forms he would take great inspiration from. In 1877 the Paris Salon accepted one of his works, marking a major turning point in Rodinâs career.

Early in his career, Rodin faced harsh criticism for his naturalistic style that deviated from figurative sculpture traditions in which works were decorative, highly thematic, and centered in mythology and allegory. Though he was schooled traditionally, Rodin preferred to emphasize the physicality of the human body and celebrate the individual, even refusing to change his approach to sculpture despite being faced with backlash. Nonetheless, his reputation grew, and Rodin became the preeminent French sculptor of his time and a world-renowned artist.

Your current search criteria is: Artist is "Auguste Rodin".