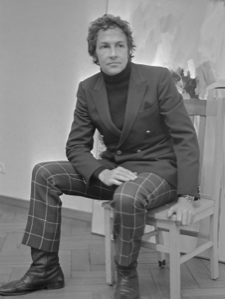 American, (1925–2008)
Robert Rauschenberg (October 22, 1925 - May 12, 2008) was an American painter, graphic artist, and prominent member of the American Post-War avant-garde. Rauschenberg is known for his Combines which incorporated everyday objects and materials which blurred the line between painting and sculpture. These sculpture-painting hybrids paved the way for three-dimensionality of the canvas at a time when Abstract Expressionism dominated the art scene.

Born Milton Ernest Rauschenberg in Port Arthur, Texas, Rauschenberg studied pharmacology at the University of Texas in Austin. Unable to anticipate the difficulty of the courseworkâand at this point was still unaware of his dyslexiaâRauschenberg dropped out shortly after enrolling, and was instead drafted into the United States Navy in 1944 where he served as a neuropsychiatric technician in a Navy hospital until his discharge about a year later. Rauschenberg went on to study art at the Kansas City Art Institute, the Academy Julian in Paris, and finally at Black Mountain College in 1948 where he sought out Bauhaus founder and professor Josef Abers, whose rigorous methods of teaching Rauschenberg believed might help refine his own practice. Rauschenbergâs combines (1954-64) anticipated the Pop Art movement, incorporating discarded materials and mundane objects to explore the intersection of art and life. Alongside his famed romantic partner Jasper Johns, Rauschenbergâs enthusiasm for popular culture and his rejection of the seriousness of Abstract Expressionism led him to innovate such an original style of painting.

Rauschenberg lived and worked in New York City and on Captiva Island, Florida, until his death on May 12, 2008.

Passport from the portfolio Ten from Leo Castelli 1969.65

Your current search criteria is: Artist is "Robert Rauschenberg".