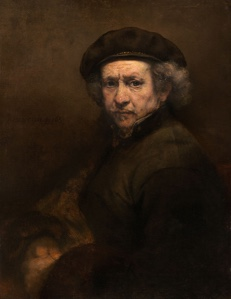 Dutch, (1606–1669)
Rembrandt Harmenszoon van Rijn (July 15, 1606 - October 4, 1669) was a prolific Dutch printmaker, painter, and draughtsman known for his innovative contributions to printmaking. Rembrandtâs wide range of subjectsâincluding biblical, allegorical, historical, and genre scenes, landscapes, and self-portraitsâdistinguished his work from other artists of the Dutch Golden Era. Yet it was his application of painterly techniques to the art of printmaking that earned Rembrandt the title as one of the greatest artists in Dutch history. Of his most famous works are The Night Watch (1642), The Anatomy Lesson of Dr. Nicolaes Tulp (1632), and the Hundred Guilder Print (1646-50).

Though Rembrandt never travelled abroad, his work was greatly influenced by the work of other Netherlandish artists who had studied in Italy, such as Peter Paul Rubens. Though he achieved artistic success at a young age, personal tragedy and financial hardship befell Rembrandt in his later years. Difficulties aside, Rembrandt continued to paint until his death on October 4, 1669 in Amsterdam, Netherlands.

Facsimile: Annunciation to the Shepherds 1938.229

Rembrandtâs Father, after the painting in the collection of Monsieur de Venice 1953.211

St. Anastasius, after Rembrantâs painting in the Stockholm National Museum 1953.212

Your current search criteria is: Artist is "Rembrandt van Rijn".