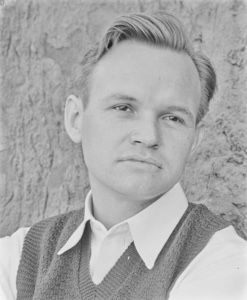 American, (1914–2009)
Pirkle Jones (January 2, 1914 - March 15, 2009) was an American documentary photographer known for his photographs of the San Francisco Bay Area landscape. Of his most notable works is his collaboration with fellow documentary photographer Dorothea Lange. Together, the two created the 1956 photographic essay entitled âDeath of a Valleyâ which chronicled the disappearance of the Berryessa Valley town of Monticello, California, which became submerged at the bottom of Lake Berryessa after the completion of the Monticello Dam.

After serving for four years in the US Army during World War II, Jones attended the first photography class offered by the California School of Fine Arts. It was there that he was connected with Dorothea Lange along with such artists as Ansel Adams, Minor White, and Edward Weston. Jones became close friends with Adams and worked as his assistant for six years.

Jones is additionally known for his collaborations with his wife Ruth-Marion Baruch, specifically their photographs of the Black Panther Party in the San Francisco Bay Area in the latter half of 1968. Jones and Baruch felt compelled to counteract negative portrayals of the Panthers in the media by producing photographs that provided a much more favorable view of the antiracist organization.

Your current search criteria is: Artist is "Pirkle Jones".