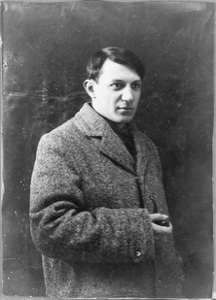 Spanish, (1881–1973)
Pablo Picasso was born in MÃ¡laga, Spain. Picasso was a sculptor, printmaker, and ceramicist, but is best known for his painted masterpieces. In addition to being recognized as the leading figure of the Cubist movement, Picasso is regarded as one of the most influential artists of the twentieth century.

After studying at the Royal Academy of San Fernando in Madrid, Picasso moved to Paris, France in 1904 where he met fellow artist George Braque who would become his partner in the Cubist movement. Just three short years later, Picasso completed his first masterpiece, Les Demoiselles dâAvignon, 1907. Inspired by Paul Cezanneâs use of multiple perspectives, Picasso melded Cezanneâs influence with his interest in the abstract forms he saw in African masks, which he had been exposed to through the European colonization of Africa. Though he spent most of his adult life in France, Picasso was deeply affected by the Spanish Civil War. In 1937 he created the now iconic muralistic masterpiece Guernica in response to the bombing of the Basque town by both German Nazis and Italian fascists.

Picasso remained in France until his death on April 8, 1973 in Mougins, France.

Platter Decorated with an Abstract and Floral Design C.69.27

The Lecture (Mother and Child Reading) / Mother with Reading Child 1960.13

Two Handled Vase Decorated with Figure of a Woman C.68.50

Your current search criteria is: Artist is "Pablo Picasso".