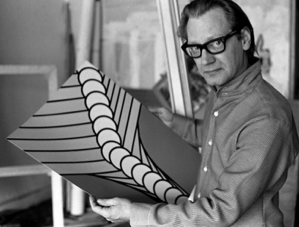 American, (1929–1999)
Nicholas Krushenick (My 31, 1929 - February 5, 1999) was an American abstract painter active in the New York City art scene from the late 1950s to the late 1970s. Though Krushenick initially experimented with Abstract Expressionism, by the mid-1960s he had developed a unique approach to painting, marked by strikingly colorful geometric forms with bold, black outlines, creating a style that would come to be known as Pop abstraction.

Born in New York City, Krushenick dropped out of highschool and served in World War II. It was with the help of the GI bill that Krusenick was able to enroll in art school at the Art Students League of New York (1948-50) and the Hans Hofmann School of Fine Art (1950-51). Like many other artists of his generation, Krushenick initially emulated Abstract Expressionism, but soon rebelled against it, driving the style out of fashion. In 1959, Krushenick made the pivotal decision to switch from oil paints to Liquitex acrylics, which had just become commercially available. The brilliance of acrylic paint had an immediate effect on the brightness and saturation of his paintings as well as the precision with which he could render them. Thus marked the beginning of Krushenickâs transition into Pop abstraction. In the late 1970s Krushenick began to withdraw from the New York art scene and instead prioritized a career as an educator, working as a professor at the University of Maryland, College Park until his retirement in 1991.

Your current search criteria is: Artist is "Nicholas Krushenick".