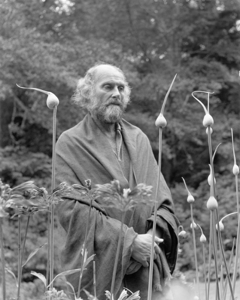 American, (1910–2001)
Morris Graves (August 28, 1910 - May 5, 2001) was an American painter and one of the earliest Modern artists from the Pacific Northwest to achieve international acclaim. He is known for his depictions of the flora and fauna of his surroundings, generally with a muted palette, exploring the spiritual bond he shared with the land and culture of the Northwest. His style, occasionally referred to as Mysticism, combined Asian aesthetics and philosophy with Gravesâ own personal iconography to explore the nature of consciousness.

Born in Fox Valley, Oregon, Graves was a self-taught artist who spent much of his adult life travelling extensively throughout Europe and Asia, and studying iconography and philosophy related to Zen Buddhism. Preferring solitude, Graves has lived primarily in remote rural areas where there is no shortage of artistic inspiration. Animals and birds appear frequently in Gravesâ paintings and works on paper, but are depicted with more metaphor than description.

Graves spent the last several years of his life in Loleta, California, where he died at the age of 90.

Your current search criteria is: Artist is "Morris Graves".