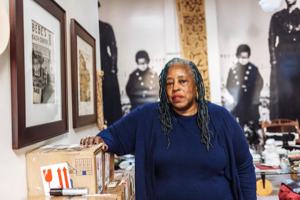 American, b. 1945
Mildred Howard (born 1945) is a visual artist, activist, and educator primarily known for her sculptural installations and mixed-media assemblages. Howardâs pieces most often speak to social issues, though she occasionally incorporates autobiographical references into her work.

Born in San Francisco in 1945, Howard was raised in Berkeley, California. Her parents were politically active in their communities, fighting for labor unions and civil rights. Howard herself participated as a youth in protests against segregation within schools in Berkeley. In 1985, Howard received an MFA degree from the Fiberworks Center for the Textile Arts at John F. Kennedy University in Orinda, California. Howard has gone on to create numerous public installation works throughout the Bay Area, including Three Shades of Blue (2003) and The Music of Language (2008), both of which are located in San Francisco. Though her work has long dealt with themes of home and belonging, Howardâs forced move from her Berkeley studio of eighteen years due to a rent increase in 2017 led to a deeper exploration of gentrification and displacement in her work. As an educator, Howard has taught at numerous notable universities and art institutions in the Bay Area, including Stanford University, the San Francisco Art Institute, and California College of the Arts. She has extensively engaged with and served her community for more than forty years, working with at-risk and underserved populations such as the homeless and the incarcerated. Howard currently lives and works in the Bay Area.

Your current search criteria is: Artist is "Mildred Howard".