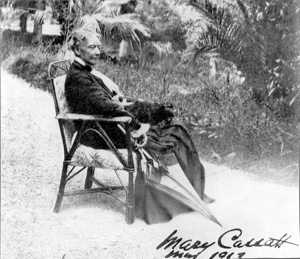 American, (1844–1926)
Mary Stevenson Cassatt (May 22, 1844 - June 14, 1926) was an American painter and printmaker regarded for her contributions to the Impressionist movement and her intimate scenes of the social and private lives of women with an emphasis on the relationship between mother and child.

Born in Allegheny City, which is now a part of Pittsburgh's North Side, Pennsylvania, Cassatt studied briefly at the Pennsylvania Academy of Fine Arts before convincing her parents in 1865 to let her study fine art in Paris. By 1968 Cassatt had her first feature in the Paris Salon. After being forced to return to Pennsylvania by the outbreak of the Franco-Prussian War, Cassatt eventually returned to Europe, settling in Paris in 1874. During her time in Paris, Cassatt began to show regularly in the Salons, and became close friends with Edgar Degas who invited her to join the group of artists known as the Impressionists. Cassatt, being one of the four women of the group and the sole American, exhibited in four of their eight exhibitions ranging from 1879 to 1886. The subjects of her paintings during this era consisted mostly of her family, her sister Lydia, and the opera. She would later gravitate toward her recurring theme of mother and child which would become known for.

Cassat died at her home in Le Mesnil-ThÃ©ribus, France in 1926.

Your current search criteria is: Artist is "Mary Cassatt".