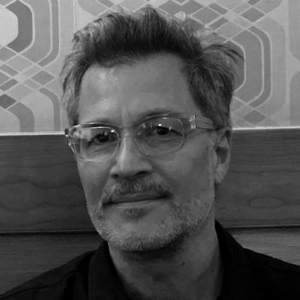 American, b. 1961
Anthony Aziz (born 1961) is an American visual artist and member of the Fine Arts faculty at Parsons School of Design in New York. Aziz is currently based in Brooklyn, New York. Since 1991, Aziz has been in collaboration with fellow artist Sammy Cucher after meeting as graduate students at the San Francisco Art Institute. Their interdisciplinary work ranges from video and photography to printmaking, digital animation, sculpture, and large-scale jacquard tapestries. The images, objects, and installations they produce are meant to reflect on the boundaries of identity at a time when the concept of identity is becoming increasingly fluid. Aziz and Cucherâs large-format photographs present bodies and faces whose features have been digitally removed while meticulously creating a painterly illusion of depth and volume in the spaces where there used to be eyes, ears, and a mouth, signifying the intersection of identity and technology.

Your current search criteria is: Artist is "Anthony Aziz".