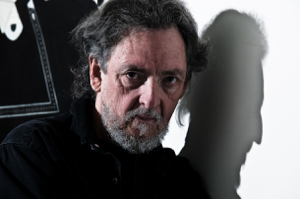 Cuban, b. 1942
Luis Cruz Azaceta (born April 5, 1942) is a prolific Cuban-American painter whose work has been described as apocalyptic pop and expressionist. Azacetaâs work deals with themes of exile, urban violence, alienation, harrowing conditions created by mismanaged government, the abuse and oppression of dictatorships, and, in the case of his works in the late 1980s, the devastation of the AIDS epidemic.

Born in Havana, Cuba, Azaceta witnessed many acts of violence, including the torture of citizens by the U.S.-backed Cuban dictator Fulgencio Batistaâs secret police. The violence Azaceta experienced living under Batista and the turbulence of the Cuban revolution impacted Azaceta immensely, influencing him to examine violence, human cruelty, injustice, and alienation as central themes in his artwork. At the age of 18, Azaceta left Havana for New York City where he graduated in 1969 from the School of Visual Arts in Manhattan. Between the 1970s and 80s, Azacetaâs style shifted from boldly colored and outlined figures in cramped, shallow spaces, to a somber, cramped compositions generally featuring a distorted nude figure. Azaceta is described as the great urban chronicler, the painter of contemporary Babylons with their landscapes of violence, drugs, crimes, plagues, and fires.

Your current search criteria is: Artist is "Luis Cruz Azaceta".