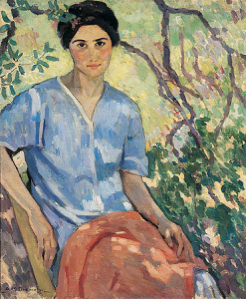 American, (1868–1923)
Anne Bremer (May 21, 1868 - October 26, 1923) was an American modern painter known for her still lifes and landscapes. Combining elements from Post-Impressionism, Cubism, and Futurism, Bremer was praised for her use of vibrant colors and dramatic linework.

Born in San Francisco, California, Bremer was the daughter of German-Jewish immigrants. She studied art with painter Emil Carlsen at the San Francisco Art Students League and with Arthur Mathews and others at the California School of Design, and Mark Hopkins Institute of Art in San Francisco, receiving a Certificate of Proficiency in drawing in 1898. Bremer then travelled to Paris to study at the Academies Julian, Moderne, and La Palette, and while there Bremer exhibited at the Salon d'Automne. Upon her return to California from her studies abroad, Bremer became a strong crusader for the modern art movement. At the turn of the century, her avant-garde approach departed greatly from the more accepted, academic style of that period. Her early works are moody, tonal pieces akin to those of Whistler, while those after 1911 are influenced by Post-Impressionism. Her subjects include old barns, dilapidated buildings, and landscapes of Saratoga, San Jose, Monterey and Belvedere as well as portraits and still lifes.

In 1921 Bremer began her struggle with leukemia, which she succumbed to in October of 1923 in San Francisco.

Girls Under Blossoming Trees [also known as Children Under an Apple Tree] 1943.147

Your current search criteria is: Artist is "Anne M. Bremer".