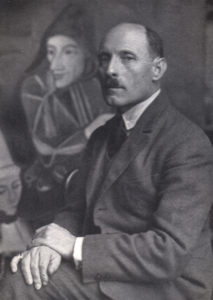 German, (1878–1955)
Karl Hofer (October 11, 1878 - April 3, 1955) was a German expressionist painter and director of the Berlin Academy of Fine Arts. Though Hoferâs work was among those confiscated by the Nazi party and labeled âdegenerate artâ during the reign of the Third Reich, after World War II Hofer gained recogniton as one of the most prominent painters of German expressionism.

Hofer spent much of his career as an art professor, and represented his own style of painting which was later referred to as âMagic Realismâ. Though the paintings of Hoferâs early career generally feature classically rendered, working-class German subjects, his work evolved with German expressionism to include politically-charged subjects within Cubist-inspired compositions. Hofer had been vehemently opposed to Nazism and published articles in a communist newspaper denouncing nazi ideology. As a result of his opposition, Hofer was promptly dismissed from his teaching position at the Berlin Art Academy in 1934. In 1937, Hofer was represented alongside over one hundred artists in the âDegenerate Artâ exhibition held by the Nazi party. Though Hoferâs style and subject matter led to the denouncing of his work by the Nazi regime, by the end of his life, Hofer was considered to be one of the greatest German painters of his time.

Your current search criteria is: Artist is "Karl Hofer".